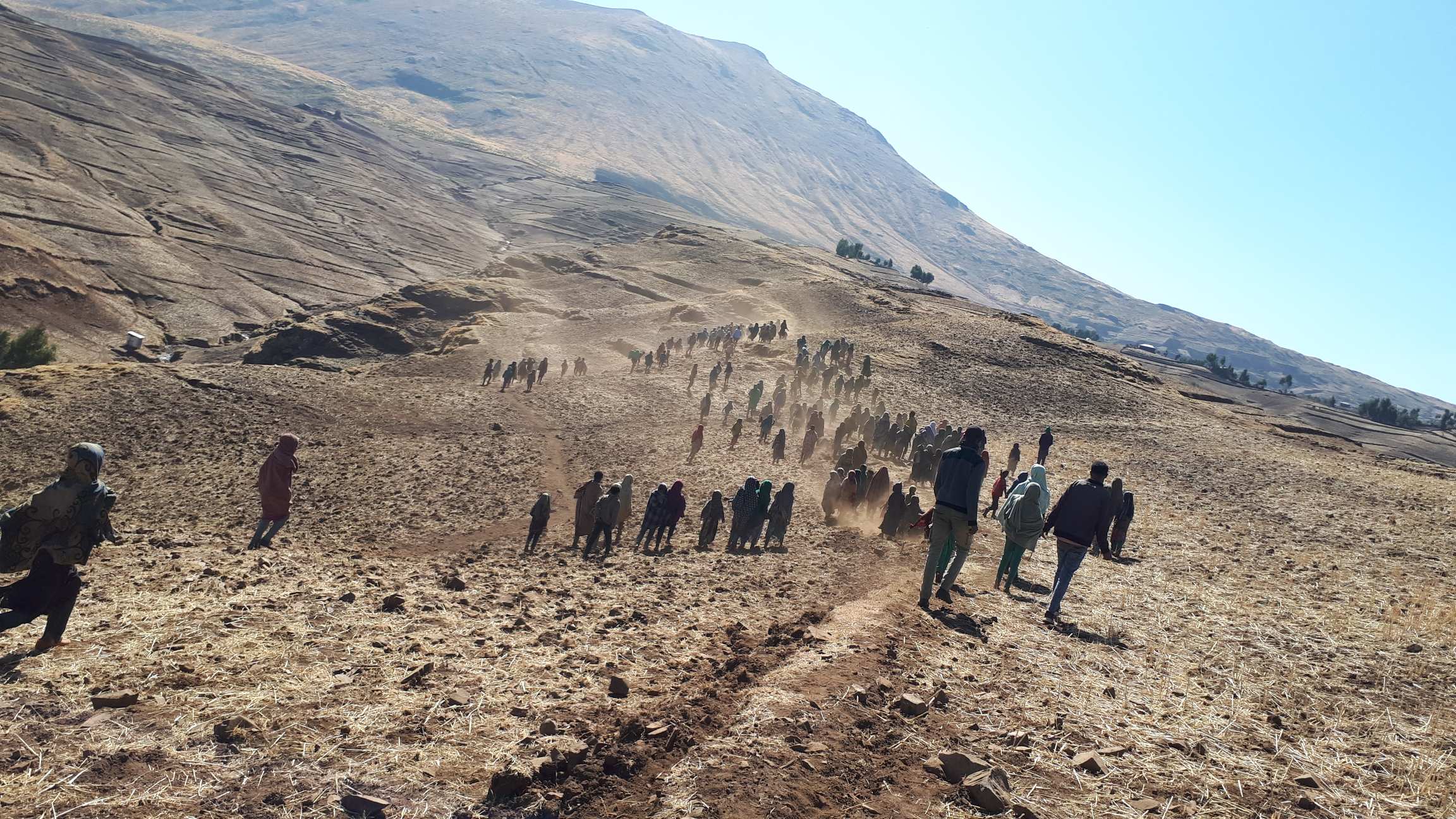 After the solar photovoltaic system, It's the turn of the Simien spring water catchment and transport to Sona school! This is the last big project of the 2020-21 dry season. It is being carried out with great speed before the rainy season arrives. A temporary river water pumping system had been set up to supply the school construction site quickly. A permanent installation of better quality was planned from the start. A spring water resurgence site had long been identified about 1.5 km upstream from the school. The local water authority, based in Janamora, was of course involved in the project and offered to build the catchment. The Foundation will be responsible for the pipeline, storage, purification and distribution of the water.

Water from the Simien

Nicknamed "the water tower of Africa", the Simien massif is an authentic reservoir of spring water. Countless streams and rivers crisscross the mountains. The Blue Nile has its source there before joining the immense Lake Tana where it acquires its status of major river of the African continent. The plateau of Sona is no exception to the rule and is crisscrossed by a number of small streams and resurgences. Water abstraction from Simien is common, as according to the local water authority, 10 to 15 new water abstractions are built every year in this area of Simien. The construction of Sona was initially scheduled for 2020, but delays due to the health crisis have pushed it to 2021.

A spring water catchment from the Simien

Unlike river water, which can be polluted by human activity and especially cattle, a spring water catchment guarantees good quality, especially at 3600m altitude in the Simien! This quality requirement is essential to engage in the awareness and education actions on good sanitary practices planned in the Foundation's program.

The complete water system in Sona

The spring is located at an altitude of 3543 meters (93 m above the school's altitude), at a linear distance of 1482 meters from the school. The flow rate to be ensured is about 800 l/h. The work on the catchment area is scheduled for the next few weeks. It depends on the water administration, which is financing it.

On arrival, a storage system with 2 tanks of 2000 litres each will also be set up. An infrastructure is being built that will house the tanks at height, as well as the planned filtration and UV sterilization system. It will be powered by a complete stand-alone photovoltaic system that has been installed with the rest of the power generation system.

The main part of the work is nevertheless represented by the buried water pipe which, on 1,6km, will connect the spring to the school!

A team of topographers came at the beginning of March 2021 to define the best route, avoiding high and low points that can lead to serious malfunctions in the installation. In particular, the accumulation of sediments in the low points, or air pockets in the high points. The route essentially passes through fields that are usually cultivated and we are in the middle of the sowing season! It was therefore necessary for Abeto, the Mayor of Sona, to mobilize his population to quickly advance the work while delaying the agricultural work! All this before the rainy season starts, expected in April. A real race against time... The community of Sona has few means, as we have already had the opportunity to say on many occasions. But what it does not lack is manpower and good will! Thus, since Monday, March 22, 3 teams of 80 people each have been working on the task!

The teams divided up the sections of the trench. The trench must be dug to a depth of 80 cm to avoid any risk of the pipe being pulled out during ploughing. The diggers must also ensure that the bottom of the trench is free of sharp rocks that could damage the pipe.

For the duration of the work, estimated at one week, a real human garland will mark the route of the future pipe that will connect the spring's catchment to the school of Sona!

The installation of the pipe requires the intervention of Eric and Ignacio. Indeed, if the elements of the pipe could be bought in Addis Ababa, the bronze fittings and the various elements of assembly were in Europe. On the other hand, the burial of the pipe requires a precise methodology because of the expansion which from full sun to underground, causes a contraction of about 4 m on such a length! At the end of March, Eric and Ignacio will be in Sona to finalize this magnificent project, if the sanitary conditions allow it of course!