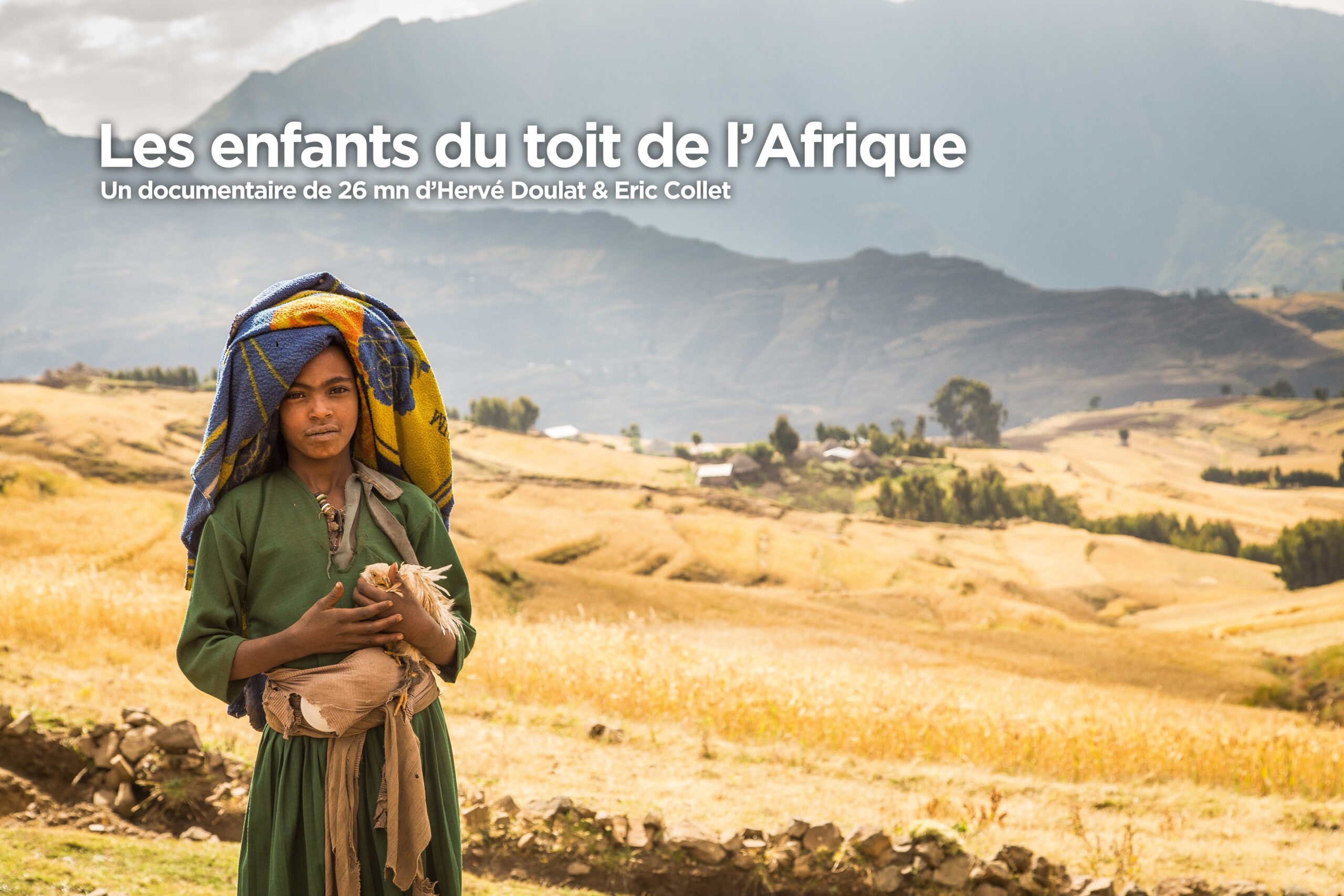 In 2017, after the 4th of our trips to Simien in Ethiopia as part of the Sona school construction project, Jean-Philippe Rapp, then director of the Festival des Diablerets, encouraged us to present a film there. Having seen the videos of each of our trips, Jean-Philippe Rapp suggested that we compile them into a documentary and complete them with interviews with locals to focus the film on daily life in Simien. The prospect of presenting Simien and our nascent Foundation (it had only been in existence for a year) in the prestigious and important setting of the FIFAD (Festival International du Film Alpin des Diablerets) made us very excited.

The idea of making a film built on the lifestyle of the inhabitants of Simien was also a very nice challenge! We set about it and in the summer of 2018 we were able to present the 24-minute film to the public in Les Diablerets. The thread we chose was the children, some of whom go to school but there are not many of them... Echoing the nickname of the Simien massif, the "roof of Africa", we called the documentary "the children of the roof of Africa".

The documentary on the Simien has been screened many times in festivals, public screenings, or the famous "base camps" of the Allibert Trekking agency. We suggest you watch it here.

Children from the roof of Africa

So much ground has been covered (see the video of our last trip ) since the making of this documentary! Much remains to be done and, if this film has aroused in you sympathy for these populations and our action, do not hesitate to make a donation (tax-free) !

The Simien massif in northern Ethiopia is a UNESCO World Heritage Site. With its high plateaus at an altitude of over 4000m, it is called the "Roof of Africa". Despite the harsh living conditions and extreme isolation, many people live in its foothills.

Farmers in their immense majority, they live in quasi-autarchy and in the conditions of the European Middle Ages... But the beauty of the landscapes, the absence of tropical diseases thanks to the altitude and the favourable climatic conditions made Simien habitable in spite of the very high altitude. Hundreds of trekkers travel there happily every year, enjoying its incredible landscapes and the proud hospitality of its people.

But for two of them, the discovery turned into a vocation: to help these populations among the most isolated and deprived of the world by building a school.

The genesis of the documentary on Ethiopia

Trip after trip, about two per year, I accumulate video rushes on Ethiopia in general and on Simien in particular. At each trip we make photos and videos that will allow us to present the school project of Sona.

In 2017 we met Jean-Philippe Rapp, a retired journalist and TV star presenter, he presides over the destiny of the famous Festival International du Film Alpin des Diablerets (FIFAD). Interested in our project and the setting in which it takes place, he suggests that we make a video "compilation" of all the images made to make a documentary about the communities living in Simien.

It is not a question of making a film to promote the Foundation, but rather to present the way people live in the Ethiopian highlands, their difficulties and their hopes. The school project is of course mentioned but the watermark will be the children who attend it, or not as many of them have to work in the fields instead of studying. The message is all the stronger for the Foundation and this work seems to us completely justified.

Moreover, as soon as the first versions were available, the Allibert Trekking agency, which has been supporting us since the beginning, proposed to organize screenings in different cities. They call these "base camps", which are thematic evenings that allow us to present a destination through a film and a time of convivial exchange afterwards. These evenings are of course commercial in nature, but they aim to present content and offer a richer exchange than a simple commercial exchange. We are therefore planning with Nicolas Manger of Allibert Trekking a series of "base camps" in Paris, Lyon, Grenoble and Geneva which will all be successful and excellent moments.

In short, from the Diablerets to the base camps, so many good reasons to make this film because we are in the early days of the Foundation and every opportunity to make it known is important! But what a job... I'm starting with a 26-minute documentary format because it is purely descriptive and does not contain any extensive journalistic work or a very rich narrative. It will be made of footage already shot for the most part and we will only have one last trip, in May 2017, to complete this footage before the Festival which takes place in August.

So I have to finish the editing in June and July, the busiest period for me! In particular, I have to write the voice-over that will structure the film. It's a hell of a job to write, and it seems so insurmountable that I can't even begin to tackle it! I asked a friend, Caroline Schlencker, an English teacher and amateur actress with a superb voice, to speak and record this voice-over. When I had trouble submitting the text to her, she finally offered to write it after defining the main lines of the message with me.

We will record it at Rémi Guirao's, a musician, guitarist and singer friend, who has the equipment and the skills to produce a good quality result. We will spend a long evening on a summer Monday, on the eve of the deadline to send the finished film to the FIFAD technical team...

Caroline and Rémi saved the film, at least its broadcasting, so important, at the Festival des Diablerets! We will meet Jean-François Labarthe, administrator of an important Geneva Foundation, who will be the first important financer to trust us!

It is so pleasant to discover, at every turn of the school project for Sona, that many people are ready to help you, to devote their energy and their talent without expecting anything in return. To participate in a humanitarian project is to find oneself in a positive collective dynamic, guided by empathy and bringing out the best in everyone.

Thereafter, Rémi and Caroline will remain my best supports for the realization of the videos of the Foundation. Caroline will write and tell me many voice-overs for the different videos we will produce, in French and in English.

After the recording of the voice-over, Rémi proposed to compose and record a custom music for the next version of the documentary, with his fellow musician Sandro Di Bartolomeo, instead of the standard music I had initially chosen. A few weeks later, it's done.

From then on, we have a magnificent video support to start our tour of the Base Camp evenings with Allibert Trekking. From Paris to Geneva, these evenings were a great success in terms of attendance and exchange. The image of Ethiopia is distorted by the humanitarian crisis of the 80's and to discover that 80% of the country is at more than 2000 m of altitude and green is generally a surprise!

The documentary was always well received, farmers and landscapes of Simien beautifully enhanced by music and voiceover!

See the Foundation's other achievements in the The project in videos.

More information on the FIFAD.