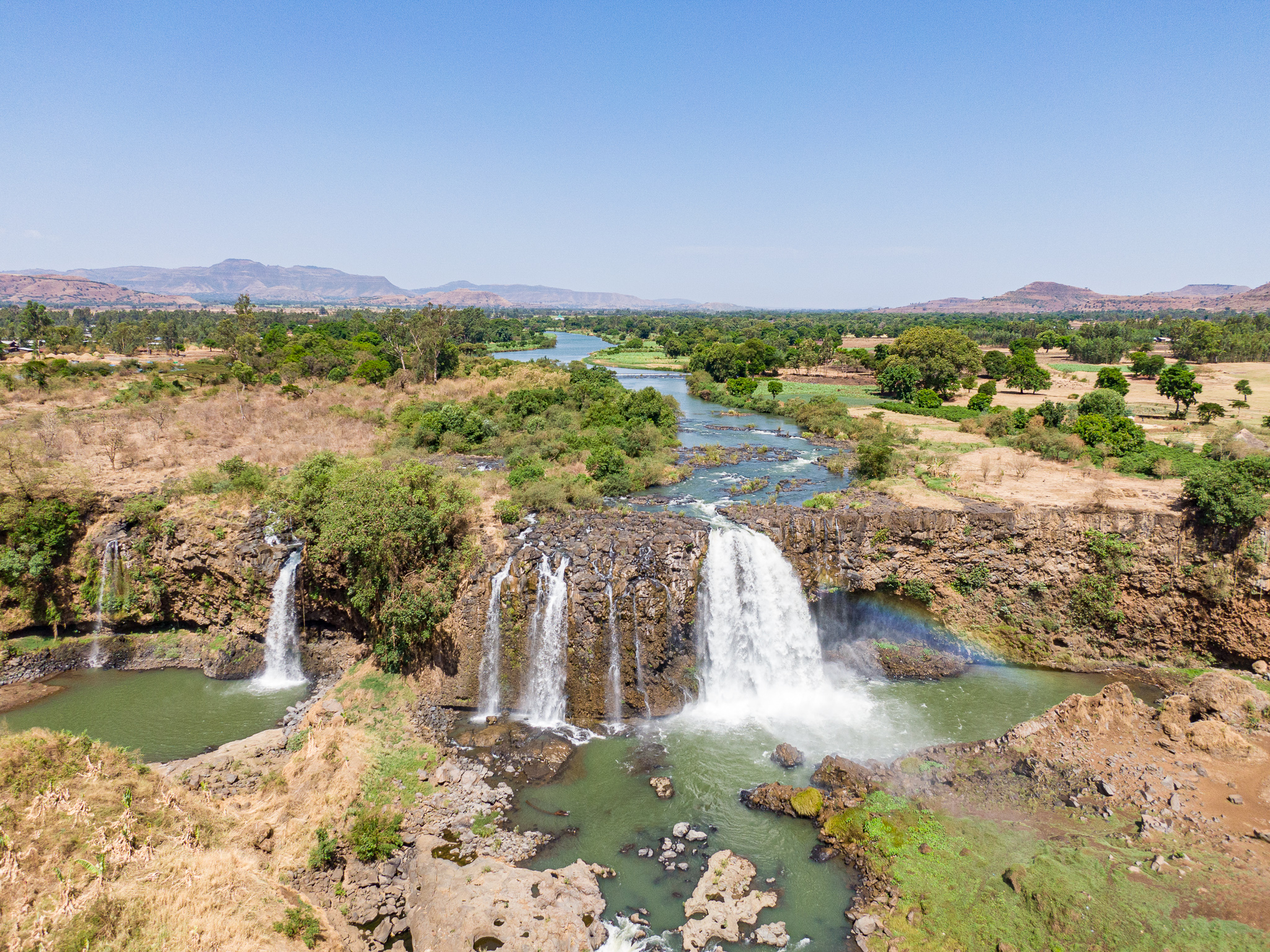 South of Bahir Dar and Lake Tana (read our article Lake Tana source of the Blue Nile), at about thirty kilometers of a chaotic track, is the Blue Nile Falls. An extraordinary site whose visit is well worth the detour!

The birth of the Blue Nile

We leave Bahir Dar by large modern avenues and very quickly the landscape changes. The buildings give way to large plots of land hosting thematic markets and the first crops. For the Lake Tana region is fertile thanks to water, especially along the Nile. As soon as it leaves the lake, the Blue Nile has a beautiful dimension of continental river. During the rainy season, its flow increases brutally and its width easily reaches several hundred meters. During the dry season, the river is wiser and its flow is regulated by the hydroelectric power stations built near the falls.

But for the time being, we quickly leave the main roads to take a track towards the village of Tis Abay (literally "big smoke" in Amharic). It takes about an hour to cover the 20 kilometers of rough track. But the low speed allows us to enjoy the spectacle of the animated life, the agricultural and wild nature that the presence of the Nile water allows. We pass in April, in the middle of the onion harvest. There are mountains of them on the side of the roads, bagged for transport to Bahir Dar and even to Addis Ababa, where the region is one of the granaries.

Finally we arrive in Tis Abay. The lack of tourists, since one year that the COVID crisis lasts, plunges a part of the population in the economic suffering. We are welcomed with open arms! We share a coffee with the group of guides. Then under a hot sun, we leave to discover this incredible site that are the Blue Nile Falls!

Because a video is worth many speeches, let's first share some pictures of the site. Remember that we are in April, at the end of the dry season and therefore at the lowest flow of the river. Despite this, it retains its spectacular character.

What is the relationship between the Blue Nile Falls and the Lake Tana ecosystem? Well, quite simply because the falls constitute an effective barrier between the two ecosystems upstream and downstream. The falls isolate in a way the ecosystem of Lake Tana. This has favored the development of a majority of endemic fauna quite exceptional, including three quarters of its fish species.

However, since 2003 and the construction of the hydroelectric power station, most of the flow is diverted a few hundred meters before the falls. It is only during the rainy season that the waterfall regains its full glory, bubbling over 400m wide and 40m high.

We hope that you will have enjoyed this touristic and cultural escapade! But we are not losing sight of the objective of our presence in Ethiopia: to build a school in Sona, in the Simien, for one of the poorest populations in the world. Thank you for your support.

To write this article, I completed my information thanks to Wikipedia of course!