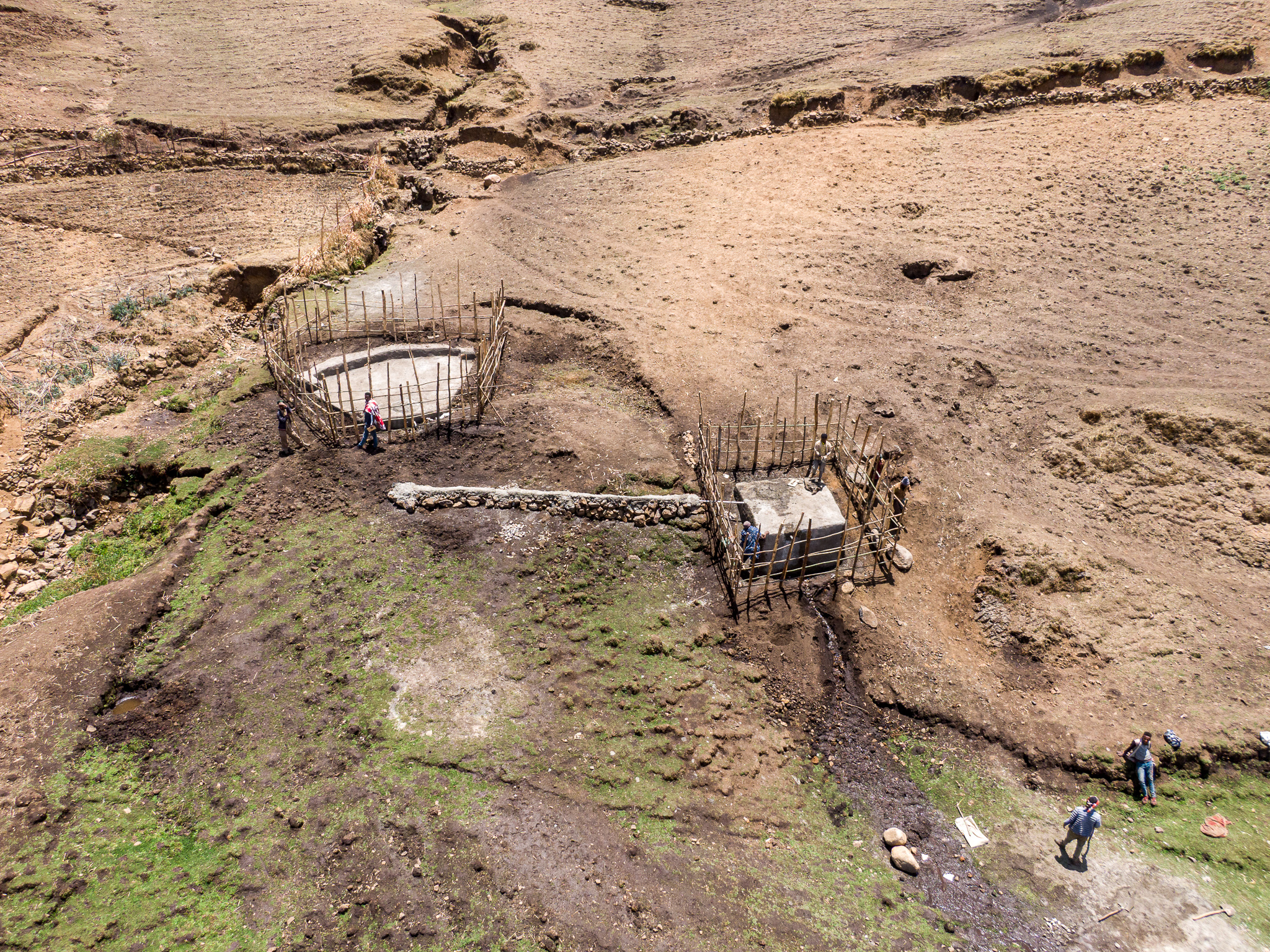 We told you about it in our previous article, Simien is full of water and its collection was planned for a long time in our project to build the school in Sona. Very quickly, we identified a spring less than 2 kilometres from the school. It is also about 100 meters up the hill. The spring has an excellent potential to supply the school. It is not for nothing that Simien is nicknamed "the water tower of Africa” !

A source for Sona's school!

Providing water to the Sona school has always been a priority. It is aboutf satisfying a basic need for drinking water. It is also enabling a quality health education to the children. After 2 years of studies and negotiations, the location of the spring was defined and an agreement was obtained for the water authority to take charge of the work. The work started in March 2021 and lasted one month. Here is a video summary!

Water catchment and conveyance: the video

The collection of the spring was taken care of by the administration of Janamora. The water supply was the responsibility of the Foundation. It was carried out with the help of the Sona community. The following rules were respected:

Here is the text of the voice-over of the video which tells the story of the construction of the catchment and the adduction of the spring of the school of Sona:

This spring 2021, the end of the dry season with bare soils ready to green again as soon as the rain is back, will remain in the history of the Sona school as that of the battle for water. What does the war metaphor do in our educational and eminently peaceful project? Quite simply because this episode in the life of Children in the Cloud has all the attributes of a fight.

Let's set the scene. The school buildings are almost finished, photovoltaic electricity was installed last February. The last major project is then the water supply from a source identified 3 years earlier. It is more than 1.5 km from the school and nearly 100 m of elevation above it. The challenge is therefore considerable!

The local water administration had promised us the construction of the catchment of this source. It's up to us to build the pipeline that would connect the source to the school, through the rugged and very rocky terrain of the Simien mountains! This imposing infrastructure is the only one capable of guaranteeing excellent quality water for the children of Sona.

Eric and Ignacio were the first, at the end of March, to go on site to supervise the work and support our local team. Because the obstacles are immense. The route first of all, over more than 1500m of slopes and rocky bars, was difficult to determine in order to minimize high and low points which could be causes of trouble in the future such as accumulations of sediment. obstructing the line in the low points or air bubbles preventing the circulation of water in the high points.

As regular as possible, the route had to go around a few rocky areas that are too difficult to pierce. In other sections, the basalt rock was relatively easy to fracture with a crowbar but then became sharp like axes. Great care had to be taken to smooth these parts of the trenches so as not to risk leaks due to the aggression of the polyethylene by these mineral blades!

The trench also crosses six streams, which are dry at this time of year, but which carry rocks and high flows of water during the rainy season, which can wash away the pipe. Metal pipes had to be found and transported to reinforce these passages and protect the polyethylene pipe. Riprap to break the torrential water flow and protect the pipe passage should allow the structure to face the coming rainy seasons with confidence.

The source of the Sona school

Finally after two weeks of efforts we were able to bury 1.5 km of polyethylene tube 80 cm deep in order to protect it from agricultural work and temperature variations, while respecting the rules of the art: unwind as much as possible when the sun makes the pipe more flexible, then put the unions at dawn before the pipe expands. At the same time, make sure that the tube is placed on loose soil without stones and that it is covered with a large layer of soil without sharp elements, then compacted with a mixture of soil and stones.

Despite the Lent period, we were able to count on a large mobilization of the population of Sona. But it was necessary to deal with the constraints of fasting which imposed short working days, and the lack of tools, in particular picks and bars to break the rocks.

During this time, the mason commissioned by the District was building the spring catchment and a buffer tank nearby. At the end of the long dry season, we were able to measure a flow of 5000 l / day, sufficient to cover the needs of the school and the neighboring inhabitants, which bodes well for having an excess of water for the rest. of the year.

However, this mission did not allow the storage tanks and the water treatment to be installed at the school, as the building to accommodate them has not yet been completed. This will be the next step, once the rainy season is over.