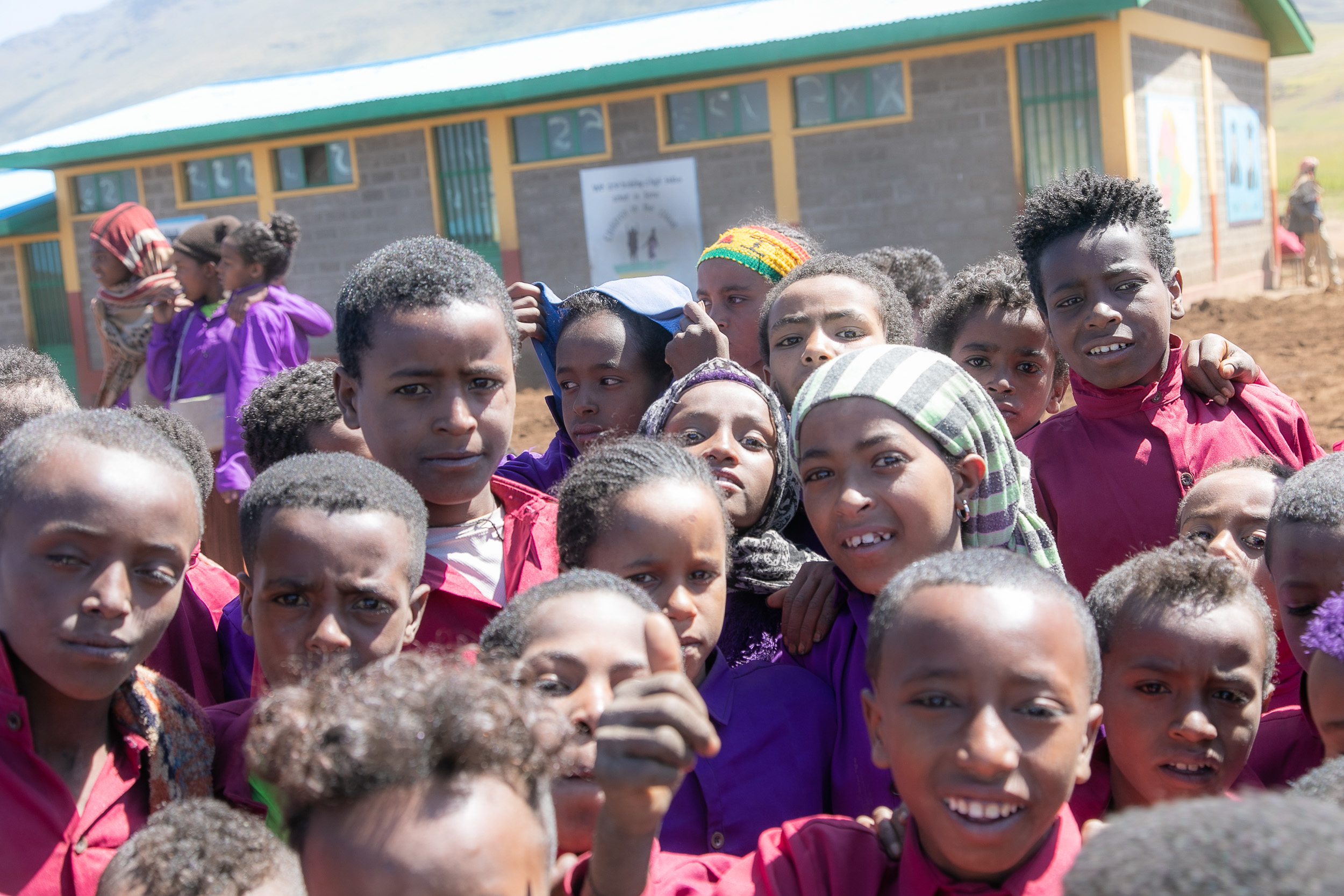 Shortly before our arrival, the security situation changed abruptly, with TPLF troops retreating to Mekele (capital of the Tigray Region) and the government troops and their regional allies (Amhara Special Forces & Fano) apparently gaining the upper hand. The military pressure on the North-Gondar Zone and Simien has thus decreased, resulting in a much more peaceful atmosphere during this visit than last March.

Our team and our partners also benefited from this calming down to find a full efficiency in their work.

Two weeks before our arrival, the school was able to resume a normal activity and welcomed back its 525 students. Each day sees the arrival of new students, attracted by the promise of a quality education. A record number of children enrolled in grade 1 with 160 students! A great promise for the future!

Here are the main achievements of this trip.

To ratify the reopening of the Sona school

The conflict is fading from the region and with it the occupation of the school by the Amhara Special Forces. The school year started again and the school was able to return to a normal activity. What a pleasure to see the school once again invaded by the children and their teachers! In order to start again, a big cleaning operation of the premises was carried out, as well as of the school grounds. If the occupation by the army did not cause much damage, the number of waste abandoned on the spot is particularly important... Let it be! Children, teachers and parents rolled up their sleeves for a big clean-up in and around the school.

Under the direction of the Kebele (the equivalent of the commune in Ethiopia), the adults were particularly involved in cleaning up around the school.

Finally, to signify the reopening of the school, we proceeded to the distribution of the uniforms which had been waiting for more than a year. Let's remember that the uniform is mandatory in Ethiopia at all levels of schooling!

Finalize the water supply and the earthwork of the school

We remember the epic story of the laying of the 1.5 km of pipe between the spring and the school. The only thing missing was the last 50 meters, which could only be completed once the school yard was leveled. By chance, and thanks to the Simien Park (SMNP), we were able to have a bulldozer for 2 days at a low price, which saved us months of earthwork by hand! Indeed, a track is under construction at two kilometers from the school and a branch has been traced to temporarily serve Sona. A fantastic opportunity that allowed us to carry out the leveling and the burying of the last meters of pipe to the water storage and treatment room in record time.

The trench was dug by a team of about twenty volunteers from the local community. We would like to thank them for their valuable contribution.

Ensure the operation of the Chirolaba school

We now have 20 young boarders at the Chirolaba secondary school, 10 per year. The operation of this school, further away from the front, has not been disrupted. It was therefore mainly a matter of making adjustments to the organization and operation, and installing the new class of 10 deserving students from Sona who have integrated the accommodation structure set up by the Foundation.

The academic results of our children are satisfactory overall and even very satisfactory for 10 of the 20 students who are at the top of the rankings of their respective levels. They represent brilliantly their village of origin, Sona can be proud of its children!

The video of the trip

Other achievements of the trip include the commissioning of the electrical installationThis is a real revolution that makes Sona's school and teachers' lodgings particularly well-equipped, offering optimal working conditions, unique in the region.

A complete inventory of the furniture of the school of Sona was also carried out to evaluate the material broken by the military occupant. It was in reasonable quantity and it will be completely replaced.

At the school of Chirolaba, a light solar lighting system was installed in the kitchen of the 2 "nannis" who take care of the children.

In the short term, it remains to carry out the connection of the water supply system and the commissioning of the filtration system. This will be done before the next rainy season.

Also in the short term, we need to define and engage the agri-environmental component of the Sona school project. A part where our partnership with the Park of Simien takes all its sense!

Download the trip report (9 pages - PDF) in French or in English.